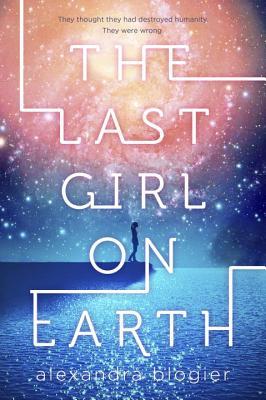 Title: The Last Girl on Earth

Li has a father and a sister who love her. A best friend, Mirabae, to share things with. She goes to school and hangs out at the beach and carefully follows the rules. She has to. Everyone she knows–her family, her teachers, her friends–is an alien. And she is the only human left on Earth.

A secret that could end her life.

The Abdoloreans hijacked the planet sixteen years ago, destroying all human life. Li’s human-sympathizer father took her in as a baby and has trained her to pass as one of them. The Abdoloreans appear human. But they don’t think with human minds or feel with human hearts. And they have special abilities no human could ever have.

Fit in or die.

When Li meets Ryn, she’s swept up in a relationship that could have disastrous consequences. How far will Li go to stay alive? Will she save herself–and in turn, the human race–or will she be the final witness to humanity’s destruction?

This is one of those cases where the premise of the book sounded amazing but I was betrayed. The first thing I noticed about this book was the cover, because it was just gorgeous, and so I decided to read the synopsis to see what it was about. And it caught me. Sci-fi is not the genre I usually reach for, but I’ve been interested (and loved) in some books lately, so I decided to give it a chance. And… it disappointed me so much.

My main problem with this book is that I didn’t get anything from reading it. I didn’t really care about the characters, the story was so flat and tropey, and everything happened really fast because of the length of the novel. I get to give it that it was a super fast read, but it didn’t make me want to continue reading.

“I’ve always worried about how you’re going to survive. But I’m beginning to see that you have to do more than survive. You have to live.”

The characters were like any other character that you find in a YA novel, which didn’t help the story at all. I was expecting more unique characters, mostly because they were all aliens minus our protagonist Li, but honestly, they were like any other teenager that appears in a book. And I was super disappointed by that because I thought I would learn more about their culture, or their history, and that was non-existent throughout the story (minus a few lines where the author is telling us something about other planets).

Also it was purely focused on the romance. Usually I don’t mind romance in a fantasy or a sci-fi story, but in this case it was a bit too much, and it didn’t make sense to me at all. Everything was done super fast, it appeared to be insta love-ish as well, and that only distanced me from them much more til the point I didn’t really care what happened to them.

Another thing I noticed was that the characters were underdeveloped. Despite everything that was going on in the book, they were the same at the beginning and end, which didn’t make a lot of sense to me, since they were going through a lot of “tough” things. Overall, they were really flat and plain.

Like I mentioned before, it was a super fast paced story, and I read in in about two or three hours, but because it was a standalone, there were some things left unanswered regarding the world and the characters. Some of them were ended so quickly I was a bit confused, and others were left out completely.

And there’s the ending. I hoped to like it more, because usually some stories tend to get better as they reach the end, but that wasn’t the case of this particular one. It came out of nowhere, and it didn’t really make any sense because of the path the story was taking. I don’t know, it was really convenient.

Overall, though the premise of the novel sounded amazing, it all happened really fast and it was really focused on the romance rather than the sci-fi elements.