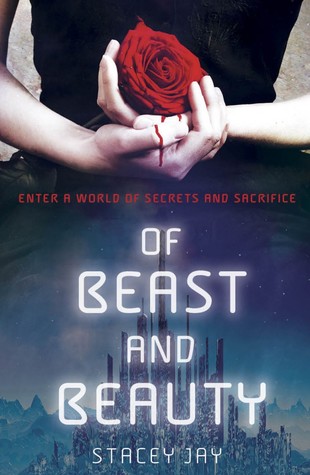 Title: Of Beast and Beauty

In the domed city of Yuan, the blind Princess Isra, a Smooth Skin, is raised to be a human sacrifice whose death will ensure her city’s vitality. In the desert outside Yuan, Gem, a mutant beast, fights to save his people, the Monstrous, from starvation. Neither dreams that together, they could return balance to both their worlds.

Isra wants to help the city’s Banished people, second-class citizens despised for possessing Monstrous traits. But after she enlists the aid of her prisoner, Gem, who has been captured while trying to steal Yuan’s enchanted roses, she begins to care for him, and to question everything she has been brought up to believe.

As secrets are revealed and Isra’s sight, which vanished during her childhood, returned, Isra will have to choose between duty to her people and the beast she has come to love.

“The girl’s misery and rage slipped away, and the secret sank like a stone,

inside her, until the truth was as forgotten as hope and beauty and all the other things given to darkness.”

This book was beyond amazing! I knew I was going to like it but holy moly, I didn’t know I was going to love it as much as I did. As you probably know already by the amount of books I read and add to my TBR, I’m a huge fan of retellings, so when I read this was a Beauty and the Beast inspired tale, I immediately bought it, and after a few months, I finally read it.

I cannot tell you a bad thing about this book right now, because I loved each single part of it, from the writing to the characters. This was a nice way to start my reading year, because wow, I’ll be talking about it more in the future.

“No amount of kindness can change who she is or what her people have done to mine. Her moment of compassion only proved she’s worse than I first assumed. To be cold and incapable of pity is one thing; to have compassion and use it only when it’s convenient is nothing less than evil.”

Let me start by saying that I really loved the characters in this book. I adored the dynamics between our main characters and their development throughout the story. Being told in two different points of view gave me diffrerent perspectives of the world and the society, since they way each lived was completely different. Isra was a Smooth Skin and princess that lived a protected and “privilaged” life under the dome, whereas Gem was a Monstrous struggling everyday to get through.

I’ve probably said this a million times already, but I LIVE for slow burning hate-to-love romances. And guys, this had my name written all over it. Though the romance and everything is slow, I didn’t get bored at all nor I struggled to get through or finish the story. On the contrary, I devoured it.

The story had also that fairytale-esque vibe that I love to see in a retelling, and not only that but throughout the novel there were a few references of the original tale, but I think the author did an amazing job at creating her own story out of something that’s been used so much lately.

Something that I also really liked is that what I thought was going to be the villain wasn’t really at all. I enjoyed how it was all sorted out, because yes, there was a villain, but I’m quite glad he wasn’t what I expected at all.

I also really loved the writing. You know I don’t usually care about the writing (unless it’s that horrible I need to point it out), but in this particular case I was mesmerized by it. It fit so well the story, and added a whimsical and eery vibe to it that I couldn’t help but notice.

Overall, I adored this book so much, and I totally recommend it to you, if you’re a fan of Beauty and the Beast or retellings in general.