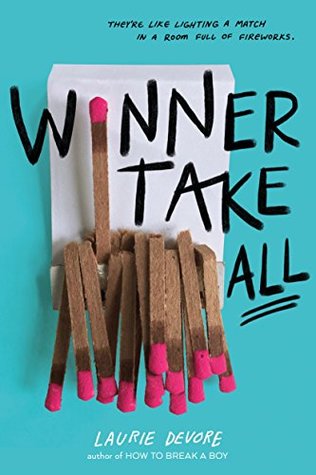 For Nell Becker, life is a competition she needs to win.
For Jackson Hart, everyone is a pawn in his own game.
They both have everything to lose.

Nell wants to succeed at everything—school, sports, life. And victory is sweeter when it means beating Jackson Hart, the rich, privileged, undisputed king of Cedar Woods Prep Academy. Yet no matter how hard she tries, Jackson is somehow one step ahead. They’re a match made in hell, but opposites do attract.

Drawn to each other by their rivalry, Nell and Jackson fall into a whirlwind romance that consumes everything in their lives. But when a devastating secret exposes their relationship as just another game, how far will Nell go to win?

“It doesn’t matter how far I’ve climbed. It’ll never be quite enough. I’ll always be just a little bit less to them. The girl who can’t accept her fate. Who won’t stop fighting.”

Oh well, I’m a smashed potato right now. I was highly anticipating this book ever since I saw that cover, because it was absolutely beautiful and different, and I after reading that premise, I’m not going to lie, I was very intrigued. But unfortunately this just went downhill for me.

I’m so thankful to the publisher for giving me the opportunity to read this earlier, and ever since I got approved I started to read this book. And… there was no plot?? I really don’t know how to describe it, but while I was reading I wasn’t feeling like the story followed a path or that it was something besides competition and revenge.

“But that’s the thing, right? Everything ends. Then you’re left trying to reach that high. Over and over again.”

I really disliked our main character Nel. She was a very unlikeable protagonist, and though I usually tend to connect with those type of characters, I found her extremely annoying and immature. She was also a really toxic character; I couldn’t realise that at the beginning of the book, but as I continued with the story, the things she did (which were not the best) and her possessiveness and obsession towards the love interest and being number one made me distance a lot.

It was quite interesting to read from the point of view of a toxic person, because I think there’s not much representation of those people in YA books, and sadly, there are many of them in real life, but being the way she was, I neither liked her nor the romance with her ememy/love interest.

Also I didn’t like the way mental health was portrayed in the book. Our protagonist suffered a few panic attacks, and if I remember right she also had anxiety, and it was completely dismissed throughout the entire story. I’m pretty sure there was once where a character told her maybe she should ask for help, and she completely ignored it and moved on. And I was super sad to see that, because I was honestly waiting for someone to talk about it, and the book mainly focused on Nel’s vendetta.

“I know it’s supossed to be a big moment. Some epic flash where you consider all your options and come to the right conclusion. That you’ve ready. But I’ve neber been the type of person to wait for something I want.”

The story was so lineal and the characters unidimensional. Most of them didn’t add anything to the story, and were there mostly to fill space or because the protagonist needed to talk to someone. They weren’t very realistic, and didn’t have hobbies or fears or anything that would suggest they were humans with their own lifes.

I also was pretty bored most of the time. I was on the verge of DNFed it multiple times, and though sometimes it wasn’t that bad and I enjoyed some of the things I was reading, The romance was quite problematic and toxic, and let me tell you there was too much angst, even for me. And that’s saying something.

Overall, I wasn’t the biggest fan of this book. The premise sounded amazing, and there were a few things that I liked, but for the most part it was very boring and problematic, and it didn’t have a plot or anything.

3 thoughts on “Winner Take All by Laurie Devore | ARC Review”