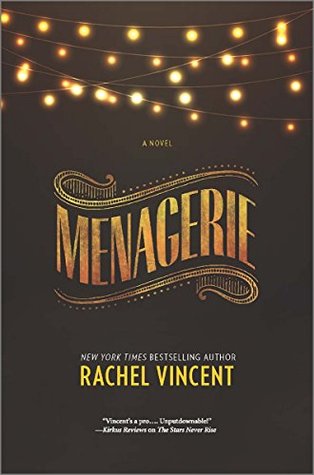 I admit this book took me completely by surprise, because even though I had such high expectations and heard good things about it, I wasn’t expecting to enjoy it as much or for it to be as different from what I pictured, but I have to say it was such an incredible first book in a series, and it left a lasting impression on me.

Ever since I knew Menagerie was about a carnival/circus I knew I had to read it, because I adore those type of stories *coughs* The Night circus *coughs*, so it was about time for me to finally pick it up. Turns out, it was so much different from The Night Circus, and way darker than what I thought it would be. However, it had a very interesting plot and such an incredible cast of characters that I couldn’t stop reading until I knew how it ended.

Sometimes main characters tend to be a little hit or miss to me, and I either love them or dislike them, and in this particular case was the former. Delilah was such a strong and intelligent character, and she had such a good development throughout the series that I was shocked by how much I loved her. Not only she had a very complex character arc, but she wasn’t afraid to speak her mind, and I think that she added so much to the whole plot. Her relationships and interactions throughout the story were done so well, and I honestly cannot wait to read more about her, because after this first installment, I think she’s so much to give.

“She won’t serve her dish cold,” the oracle mumbled, almost giddy with joy as chill bumps rose all over her skin. “And two graves won’t be near enough…”

I was beyond happy to see that there was hardly any to no romance in this book. Though I think there’s going to be a romantic relationship between two of the characters that appeared in Menagerie in the sequel, I was glad there was none in this book, because otherwise it would have been a bit forced and not make much sense.

There were some things regarding the hybrids or what happened before the story took place that I wish we’d had more information, and I don’t know if in Spectacle we will be knowing more about them, but if I have to complain about something, that’d be it, because I wanted that to be a bit more complex.

The story was super fast paced, which took me completely by surprise because I thought it was going to take me more to finish the novel, but I flew through the book. It was so engaging and interesting, and I thoroughly enjoyed the ending, and the twists and turns.

Overall, it was such an intriguing and dark first installment, and I loved the characters and their dynamics, and cannot wait to pick up the next one and know what’s going to happen next.