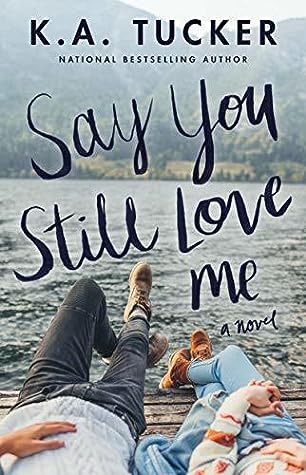 Title: Say You Still Love Me

On the one hand, she’s a twenty-nine-year-old VP at her dad’s multibillion-dollar real estate development firm, and living the high single life with her two best friends in a swanky downtown penthouse. On the other hand, she’s considered a pair of sexy legs in a male-dominated world and constantly has to prove her worth. Plus, she’s stuck seeing her narcissistic ex-fiancé—a fellow VP—on the other side of her glass office wall every day.

Things get exponentially more complicated for Piper when she runs into Kyle Miller—the handsome new security guard at Calloway Group Industries, and coincidentally the first love of her life.

The guy she hasn’t seen or heard from since they were summer camp counsellors together. The guy from the wrong side of the tracks. The guy who apparently doesn’t even remember her name.

Piper may be a high-powered businesswoman now, but she soon realizes that her schoolgirl crush is not only alive but stronger than ever, and crippling her concentration. What’s more, despite Kyle’s distant attitude, she’s convinced their reunion isn’t at all coincidental, and that his feelings for her still run deep. And she’s determined to make him admit to them, no matter the consequences.

K. A. Tucker does it again! Ever since I read The Simple Wild and totally fell in love with it, I knew I was going to pick up everything that she would write in the future, because her stories are so engaging and beautiful that you can’t just help but love them, so needless to say I went into Say You Still Love Me with very high expectations, and overall I have to say that indeed I was pretty surprised, because it ended up being something completely different from what I pictured in my mind.

The plot of the story was so interesting and fun, and in my opinion perfect for the summertime. It took a little bit for the story to flow, but I find that normal in contemporary romances, since it’s building those characters and that plot for the reader. Nonetheless, I found K. A. Tucker’s writing in this book incredibly detailed and engaging. I absolutely adored her way to tell a story and write descriptions, and I think she has a way to keep the reader committed throughout the entire book. I found really cool the jumps between past and present and how it was done in Say You Still Love Me. There were certain things that were addressed in the present that we had no idea how they happened until we read the flashbacks, and I think that was super clever and made me want to keep reading until I knew what in fact happened at Camp Wawa.

When it comes to the characters, I don’t know if I was surprised or not, but I definitely fell in love with them. I had a few minor issues with a couple of male behaviors at some points of the story, but for the rest of it, I was so pleased with them. They had a sense of vulnerability and realism attached to them during the entire book, and because it was told in Piper’s POV, we got to know a lot about her arc, personality traits and inner thoughts, which made it so easy to empathize or understand her.

And oh my my, that romance. I had a feeling I was going to enjoy it, but I fell head over heels for it. Not only Kyle and Piper had an explosive chemistry throughout the book that we could definitely tell by the little descriptions about gestures, but also this book was super angsty and slow burning, especially the “present” POVs. I was blow away by how much I was rooting for these characters and wanting them together, and I think they had such amazing dynamics going on between them throughout the book.

I also really adored the female friendship. I love seeing healthy friendships in books, and I think the relationship between these three girls was amazing and so precious, and it was nice to see it added to the story.

Overall, Say You Still Love Me was such an incredible story and perfect for this time of the year. I really enjoyed the plot and the characters, and their evolution throughout the story, not only as a couple but as individuals too. And after finishing this I will for sure check more of her works and read them!