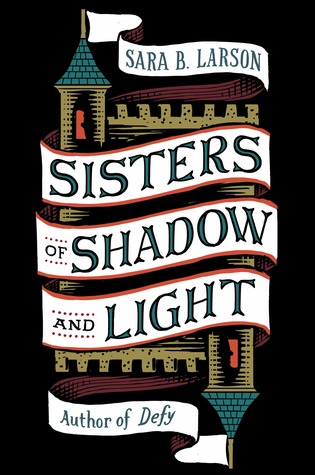 Title: Sisters of Shadow and Light

Series: Sisters of Shadow and Light #1

The night my sister was born, the stars died and were reborn in her eyes….

Zuhra and Inara have grown up in the Citadel of the Paladins, an abandoned fortress where legendary, magical warriors once lived before disappearing from the world—including their Paladin father the night Inara was born.

On that same night, a massive, magical hedge grew and imprisoned them within the citadel. Inara inherited their father’s Paladin power; her eyes glow blue and she is able to make plants grow at unbelievable rates, but she has been trapped in her own mind because of a “roar” that drowns everything else out—leaving Zuhra virtually alone with their emotionally broken human mother.

For fifteen years they have lived, trapped in the citadel, with little contact from the outside world…until the day a stranger passes through the hedge, and everything changes.

“I didn’t know… would probably never know. That not knowing was like an itch beneath my skin, unreachable and, at times, unbreakable.”

This was the first time I read anything by Sarah B. Larson, and I have to say I was pretty impressed. I was so intrigued by the premise of Sisters of Shadow and Light, because I tend to really enjoy books that tend to focus on sisters’ relationship, and this sounded like a perfect book for those cravings, and I have to say that overall I really enjoyed this first installment, and I’m curious to see how everything’s going to end in the sequels.

The plot was actually very interesting. It was a very easy book to get into, and super fast paced and easy to read. Though I would say that it came a point where things were dragging a little bit, especially in the middle part of the story, the rest of it was very interesting and kept me engaged the entire time.

Something that I adored about Sisters of Shadow and Light was the world and the magic. I think the concept of the different creatures and the portals was so cool and done in quite an unique way, and I enjoyed how all the things regarding that society or the different monsters was introduced to the reader as we kept reading the story, instead of all that information being thrown at us at the very beginning. I still would have loved for them to be a bit more complex and thorough, but for a first installment we got to see a fair picture of what this world was.

When it comes to the characters, I was so pleasantly surprised by how much I liked them. I think both of the sisters, Inara and Zuhra, had a nice development and arcs in general, and I really enjoyed seeing the grow more and more as the book continued. My favorite part about them was how much they cared and loved each other, and how those feelings transferred through the paper. You could clearly see how each sister loved the other, and everything they were willing to do to keep each other safe, even if it risked their own safety and lives, which I think was an important point for me to empathize with them. They had great dynamics going on between them, and I was rooting for them the entire time.

My only complain was that there came a time where the book was told from Inara’s ans Zuhra’s POVs, instead of Zuhra”s, and I feel we got to know more information about what was happening from Zuhra’s perspective than her sister’s, which was a bit of a bummer because I considered that Inara was such an interesting character that was a bit unexplored throughout the story.

Something that I was a bit 50/50 about was the romance. Though I overall really enjoyed the different couples that formed in Sisters of Shadow and Light, it’s true that they gave me an insta love-y vibe sometimes. Since there were a lot of things going on, it was a bit hard to believe that these characters could developed feelings for each other, especially in that short amount of time, and it didn’t feel as believable as I wanted to.

Another thing that bugged me quite a bit was everything related to the villain of the story. I think the whole concept and the big plot twist where they were revealed could have worked out perfectly, if we only knew more information about them. But since they were more a recurrent character than one that was constantly kept in the story, it made me feel a bit disconnect to the entire story so suddenly.

Overall, I was pretty impressed by Sisters of Shadow and Light, and really enjoyed the plot and the sisters’ relationship, and thought it had a very interesting world and magic system. Though I had some minor issues with the story, I’m interested to read more about this author in the near future.

“I would find the strength. I had to. I refused to drown.”

1 thought on “Sisters of Shadow and Light by Sarah B. Larson | ARC Review”