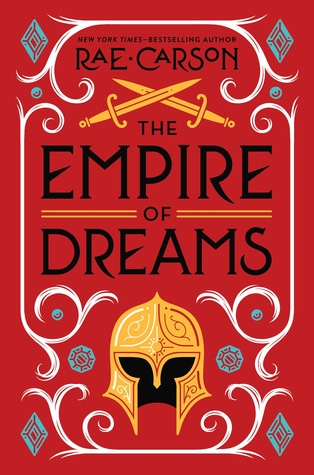 Even though Red Sparkle Stone is a foundling orphan with an odd name and a veiled past, she’s about to be adopted into the royal family—by Empress Elisa herself. Sixteen-year-old Red can hardly believe her luck. Then, in a stunning political masterstroke, the empress’s greatest rival blocks the adoption, and Red is left with no family and no future.

Grieving and lost, but determined to find her place, Red hatches a daring plan: she will prove herself as a recruit for the world’s most elite fighting force, the legendary Royal Guard—something no woman has done before. But it’s no coincidence that someone wanted her to fail as a princess, someone whose shadowy agenda puts everything she loves at risk. As danger closes in, it will be up to Red and her new friends—and maybe some new enemies—to save the empire. If they can survive recruitment year.

“The girl wanted to be a bird. She would spread her wings and fly far away. It would be effortless, so different from this icy trudging.”

Okay, I admit I was so excited about this book. Despite having only read the first installment in her original series, I wanted to pick it up because I believed this book was a spin-off of said series and you didn’t need to read the OG Fire and Thorns trilogy, but after falling completely in love with this one I for sure will be continuing with that series.

Something that I loved about this book was the world building. I think having read the first book of the original Fire and Thorns trilogy gave me a little bit of knowledge of what this world was about, but I still think she did an amazing job at describing this world for new readers. There were some things that I didn’t remember after many years of being apart from this world, and some new things that I discovered in this installment that made me fall in love with it. However, I think that if you aren’t familiar with the books, it might be a bit confusing when it came to the magic system, because it wasn’t really explained in this book (maybe it will be in the sequel), though it was an important focus of the story.

But what really made this book shine were the characters. I think though it had an interesting plot and that it was pretty well done, what really stood out to me where the cast of characters. I feel this was more a character driven type of story, and the sequel will be more focused on the plot, but honestly I don’t really care because I for sure will be picking it up.

Our protagonist was absolutely fantastic. She was so well written and had such an interesting and complex arc. The story was told from her POV but in two different timelines, so while you were reading about her present time in the academy, you also knew little snippets about her former life, and wow, it wasn’t it heartbreaking and sad! I admit I cried multiple times while reading this book, mostly because of everything done to her while being a child, but also I admired the person she became and her evolution.

“I guess I want my legacy to be more than a pile of ashen bones.”

Another thing I really enjoyed was that it had actual functional family relationship. Though it wasn’t super explored, you could clearly see not only how much Red cared for her adoptive family, but also how much Elisa and Hector loved her, and that was something that made my heart warm and fuzzy.

Not only that but I also really enjoyed the little friendships formed throughout the story. I was pleasantly surprised to see that there was no romance in this book (though I’m pretty sure there will be in the next installments), but I was pretty happy to see really complex and well written m/f friendships, which I don’t usually come across.

However, I had a teeny tiny issue with Empire of Dreams, and that was the ending. It was a bit rushed and there were certain things that happened quite conveniently, and there were some revelations that were a bit predictable, and I would have loved to see them done differently.

Overall, I adored Empire of Dreams, and totally fell in love with the story and the characters. Not only it had an interesting plot, but the cast of characters were so well written and complex, and I loved the relationships developed throughout the novel.

1 thought on “Empire of Dreams by Rae Carson | ARC Review”