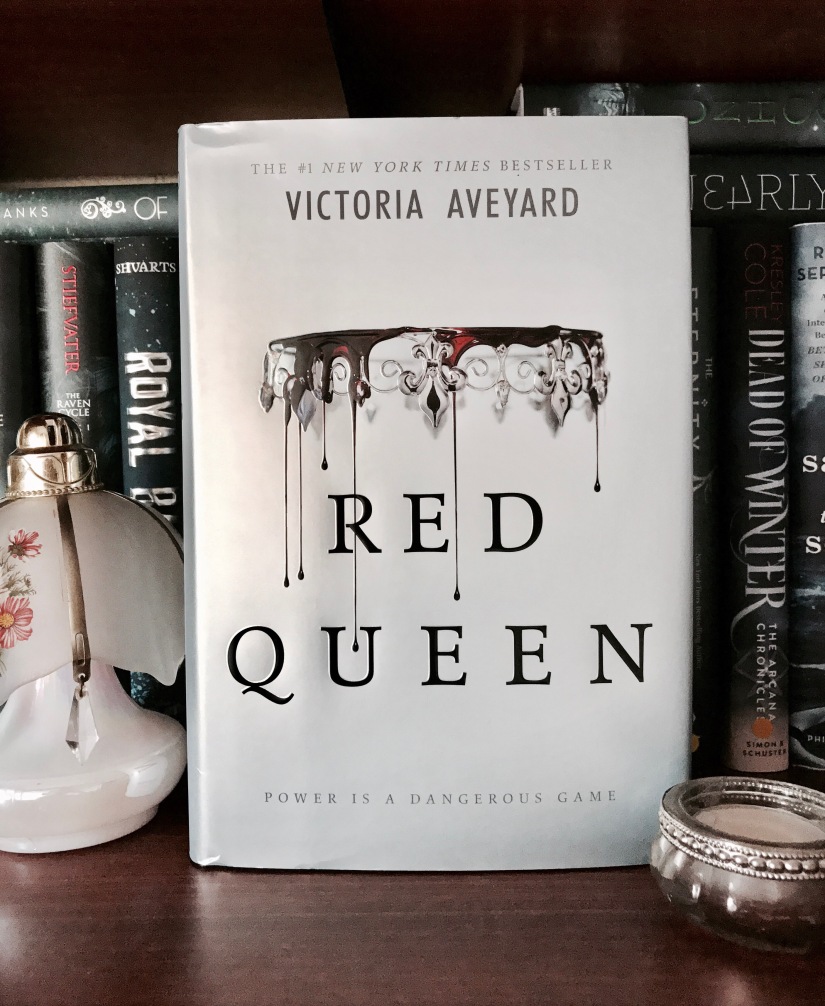 The Reds are commoners, ruled by a Silver elite in possession of god-like superpowers. And to Mare Barrow, a seventeen-year-old Red girl from the poverty-stricken Stilts, it seems like nothing will ever change.

That is, until she finds herself working in the Silver Palace. Here, surrounded by the people she hates the most, Mare discovers that, despite her red blood, she possesses a deadly power of her own. One that threatens to destroy the balance of power.

Fearful of Mare’s potential, the Silvers hide her in plain view, declaring her a long-lost Silver princess, now engaged to a Silver prince. Despite knowing that one misstep would mean her death, Mare works silently to help the Red Guard, a militant resistance group, and bring down the Silver regime.

But this is a world of betrayal and lies, and Mare has entered a dangerous dance – Reds against Silvers, prince against prince, and Mare against her own heart.

"In school, we learned about the world before ours, about the angels and gods that lived in the sky, ruling the earth with kind and loving hands. Some say those are just stories, but I don't believe that.

The gods rule us still. They have come down from the stars. Adn they are no longer kind."

Whoa, finally I've read this book! I feel like it's been forever since I first heard about it, and I really wanted to read it, but it wasn't until now that I did it! This is one of the most contradicted books I feel, and you either loved it or hated it. In my case, I didn't particulary loved it but I enjoyed it. Well… I have mixed feelings about it, okay? Some parts were extremely boring in my opinion, but others were amazing and I really enjoyed them.

I feel it was a bit hard to read a book that lots of people know about, especially because you already know which characters were important or that there was a mindblowing plot twist, and it messed a bit with my conception of the story. That's the problem with hyped books. However, I try to stay away from all the reviews and people talking about this novel, so I could be surprised and form my own opinion.

And I have to say that I would have DNFed it if not because everyone said there was a really good plot twist in the second half of the book. I was in the middle of a reading slump, and I pushed myself to read this book, so some things were a bit boring and hard to read. But the second half? That was freaking amazing!

"The truth is what I make it. I could set this world on fire and call it rain."

The main problem is that I felt there was nothing unique in the story. The world was your normal dystopian one, where there are two types: the rich and the poor. I liked knowing about Silvers and Reds and how society worked, especially because since the protagonist lived in both sides of that society, you could see the differences and how each of them lived.

But the first half of the book was really boring, as I said before. I felt like nothing was really happening, and you were introduced to all those things in court that I had no interest in knowing about (well, maybe some of them) and there was no action or anything good. Yes, you were introduced to a bunch of characters and different families and all those royal rules and some of those things were a bit unnecesary to me.

The characters were your average characters. I did enjoy Mare throughout the book and her development, but at the beginning she wasn't my favourite. She made such stupid decisions that I wanted to punch her, BUT she grew on me.

My favourite character and the one I felt was a bit more unique than the others was Maven. Yup, definitely my fav. At the beginning I was like "oh, okay, you'll be interesting", and it didn't disappoint me. He was. And that's what makes the story a bit more special and made me want to continue reading. And the main reason why I'm going to read the sequel. I feel he had a lot of potencial, and I can't wait to see him more in Glass Sword.

And not, the part I was expecting in the entire book: the plot twist. IT WAS A REALLY GOOD ONE, let me tell you. I really loved how the author did that, because it came out of nowhere and I clearly didn't expect it at all. I would say I saw something like that coming, but I didn't have the whole picture in my mind, so even though I guessed it right, it was still a bit shoking to know the entire thing.

So, I'm glad I continued reading the story, because even though the first part was a 2-starrating to me, I ended up giving the book 3 stars because the ending and that plot twist was amazing.